Tales of a Reluctant Activist “One of my goals in 2017 is to be brave.” This is what Bridgette Dutkowski told me when I asked if she’d be willing to write about her experience at the Women’s March on Washington. While you may or may not recognize her name from our Monthly Reading Edits, Bridgette lends her vast talents when mine fall short, with a methodical attention to detail and the uncanny ability to crack the whip when shit needs to get done. She’s been an invaluable sounding board for me in all aspects of the W&D brand and I’ve come to trust her gut almost as much as I trust my own. Thank you, Bridgette, for stepping out and sharing your story. – Kate

I’m a white, middle-class woman in my (gulp) late 30s. I’m very happily married, with two kids and I live in a nice neighborhood in the capital city of a progressive state. What in the hell do I have to complain about? These are the thoughts that raced through my head as I purchased my business class airplane ticket and booked my Airbnb loft in preparation for the Woman’s March on Washington, which happened January 21st, the day after the inauguration of our or new President.

I’ve personally had never had to capital “F” fight for any of my rights. I grew up with (somewhat) progressive parents that raised me to believe that I could do and be anything as long as I worked hard enough. While by no means wealthy, both of my parents worked at stable jobs in the medical field and made a comfortable living; we never had to worry about our next meal or if we would have a roof over our heads the next month. My parents worked hard, so my sister and I could have every advantage to succeed. Even after my parents divorced, my mother raised us without wanting or need, believing that the world was a fair and just place. That the proverbial glass ceiling was mine to shatter; that one day, we would see a woman president. But that was the 90s. I was raised to believe that prejudice was going to be a thing of the past, that the marches and civil unrest of the 1960s were the beginning of lasting change. That the hard work that my parents and that their generation had put in would be enough. By growing up with every advantage I had, I was blissfully unaware of the reality of others. I’m not naive to think that injustice didn’t still happen in the world, but I had believed that these were isolated incidents and not part of the day-to-day reality for a vast part of the population. Along with a penchant for hard work, I may have also inherited my mother’s rose-colored view of the world, along with my father’s tendency to ignore and suppress the bad things and experiences in life.

The election stirred up feelings of anger, frustration, sadness for me, and many others like me. These emotions are not about how my candidate lost, and another won. My feelings don’t stem from not having a woman president or sour grapes; these emotions are from watching the change that so many had fought for and the rights (that I had admittedly been taking for granted) being threatened. I was frustrated and angry and didn’t know what I, as one individual could do to affect change. I was out of my element. For the entirety of my life, I could rely on having these rights, and progression and seemingly overnight, that had shifted. I could not longer guarantee that affordable healthcare will be available for my retired parents. I felt like a liar teaching my daughter bodily autonomy; that no one has the right to touch her if she doesn’t want to be touched. All the while in the back of my mind is a direct quote from our newly elected President: “Grab them by the pussy. You can do anything.” I can’t guarantee that my daughter’s body, and the decisions that go along with it, belong to her.

These rights that were confidently mine, to pass along to my children, are no longer assured. All of these reasons are why I chose to leave my comfortable, little bubble and go to Washington D.C. to march.

I march to have my voice heard. I march to speak for those that can’t. I march to show my government that I will be holding them accountable for their actions. I march to assure the rights, which I took for granted, are there for not only my children but for all children. I am only one person, but if I am one of many, my voice will be heard. I will not give up, and I will sure as hell not go quietly into the night.

Am I late to the party? Absolutely. But I’m here now, and I’m not going back. When she’s got a break from the care and feeding of her three small children, Bridgette enjoys trivia nights, entertainment or history-related podcasts, reading “light” nonfiction (and the occasional thriller), and binge-watching television with her husband.

I love this and have similar sentiments. Are we late to the party? Hell yes. Do we have to get (and stay) uncomfortable? Absolutely. I feel that those of us with privilege have an obligation to those with less to be an advocate. There is power in accountability, for both our elected officials and ourselves.

This is exactly what I needed to hear. This weekend my sister in law posted about how she’s never felt suppressed and anyone who does is just playing a victim so the women’s march was just full of a bunch of cry babies. Basically. It broke my heart and I tried to explain to her why I march. Because I’ve been lucky and privileged in my life and because of that, I’ve got a lot of leftover energy to stand up for others who really, really do need a lot more than I do. I am LOVING the direction that… Read more »

Thank you for publishing this piece. If this first week is any sign of what is to come, it’s clear that we have a lot of work ahead of us. Complacency is no longer a option, we must act, make sure our voices are heard and fight against injustice. Thanks Wit & Delight for being so vocal about what’s going on right now. Blogs are primarily run and read by women, it’s so encouraging that you’re not shying away from what could be construed as controversial topics.

Thank you, thank you, thank you for this incredibly well written post. I come from a similar background and have spent a majority of my life not speaking up because I didn’t want to ‘upset’ anyone. What a silly idea, to not stand up for myself and others under the guise of pleasantness. If there is any positive takeaway of the last few months, it’s utilizing the loud voices that so many of us were born with but until now have been afraid to use. I’ve got 32 years of silence to make up for.

Thank you for writing this. It sums up my feelings exactly – I too am an upper middle class cis white woman who has felt ashamed about being late to the activism party (and completely and totally complacent due to a myriad of privileges). It’s nice to know that others feel this way too. For my leap off the armchair, I’m planning on doing this with friends throughout the Trump administration: http://www.designsponge.com/2016/12/solidarity-sundays-entertaining-for-a-good-cause.html.

This is an incredible post with so many sentiments that I relate to. I just heard Jamie Lee Curtis this morning say that she just “woke up politically” last year and I feel like I have too. I also didn’t think I had much of a voice because my life was pretty swell and so many others were speaking out, who am I to say anything? But yes, I’m late to the party too but I’m glad I’m here now and I’m not going anywhere. Thanks so much for writing this Bridgette!

Thank you for having the courage to speak up! Even though I am in Australia, I am watching with horror developments in the states – the Trump effect is on the rise in other democracies like ours and it’s so disturbing, in particular the rise of anti-science and alternative facts (ie lies). All of us, the left and right side of political opinion, benefit from respecting the truth and offering equal opportunity to all.

I appreciate this post, and I hope that as W&D becomes more vocal about these issues, a platform will be given not only to those joining the fight now, but to those who have never known privilege, or safety, in this country. Yes, white cis women showed up when their reproductive rights became endangered, but where were they when their black sisters were being killed by police? Or when their indigenous sisters were fighting for the land that was stolen from them? Or when their trans sisters were being harassed and assaulted and abused and murdered in the streets? It… Read more »

Hi Tanner! Thank you so much for your comment. We have some bigger projects planned for 2017 that involved community action, philanthropy, and storytelling not just with women of color but refugee families, people with disabilities, and other marginalized groups. Because you’re right, it’s not enough to just talk or provide a safe platform to share. But it’s a start. We’re working on it.

Please email me if you have any ideas on how we can proactively help our readers (many of which are white women) get involved. I would love to get as much insight as possible. kate@witanddelight.com

Thank you for sharing your story! I also marched in DC this weekend and wrestled with similar concerns. I’m still meditating on how I can be a more inclusive feminist going forward, as the commenter above speaks to. It’s a long road!

Thank you so much for this! It’s so easy to avoid politics and divisive issues for fear of losing your following. I appreciate you using your platform to share your feelings on such an important topic!
<3 5 Coat Styles I’m Most Excited to Wear This Winter How to Foster Creativity in Your Daily Life 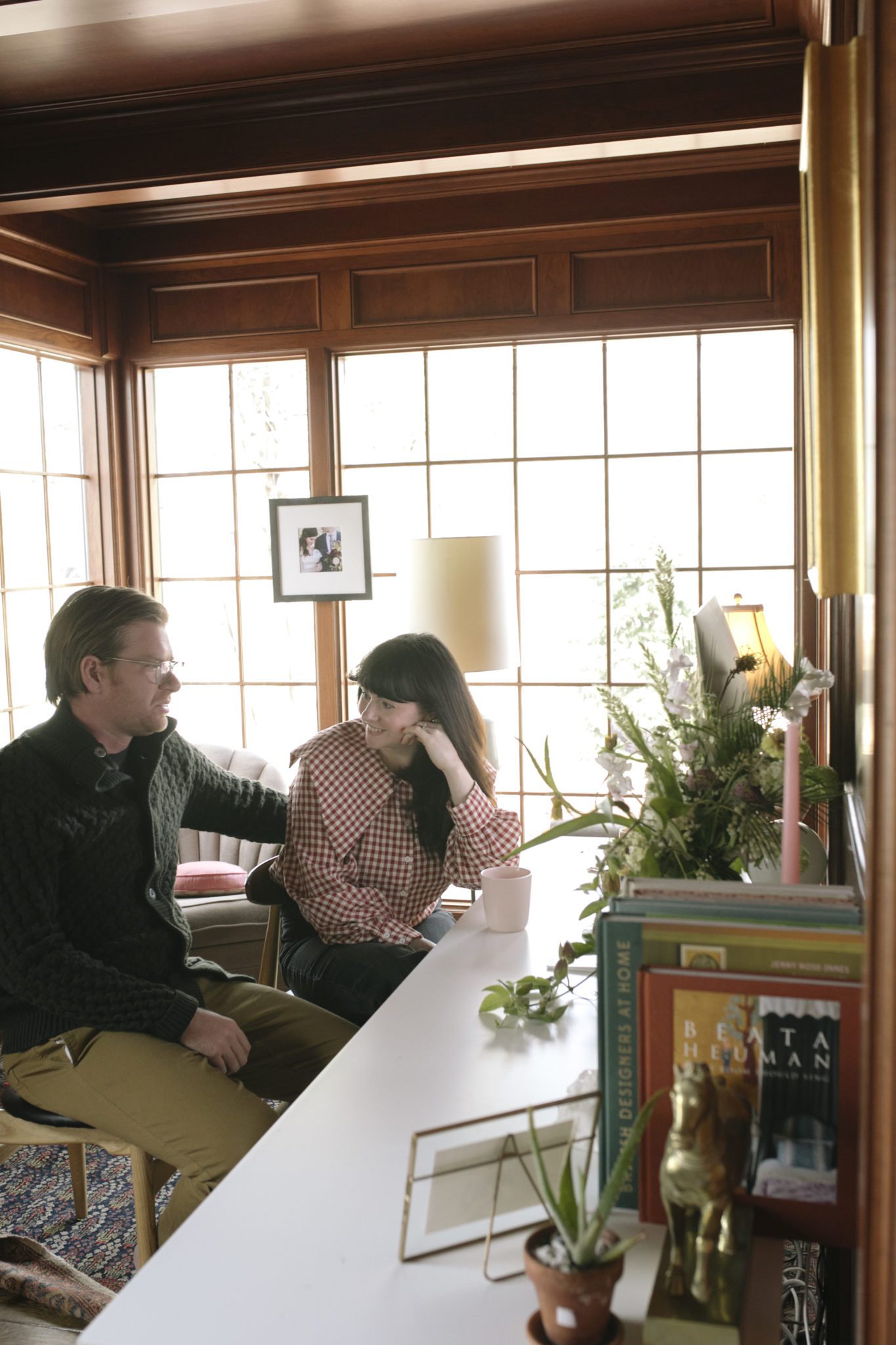 How to Budget for Holiday Gift Shopping (Or Any Other Savings Goal!) Take a Peek at Our Design Plans for the Foyer