I take deep pleasure in cooking. First and foremost because I have a love and appreciation for food that most definitely teeters on an unhealthy obsession. But I also love cooking because it distracts me from the enormous pile of filth that is our world and at times, my brain. I do it often enough that I’ve found a few recipes that like me, are easy AF, beautiful, and appear more complex and intricate than they are. So I’m sharing them with you because sometimes we just want to fake like we know what we’re doing. I do this all the time when picking out wine, conversing about bitcoin, WRITING THESE ARTICLES, to name a few things.

All of these recipes should have very easy-to-find-in-your-own-local-grocery-store ingredients because I hate when people are like, “This is a simple recipe!” and you’re like where the hell do I get pomegranate molasses?

1. Walnut-Anchovy Pasta with Herbs (above)

Even if you THINK you don’t like anchovies, I guarantee you’ve had and enjoyed them in a restaurant dish without even knowing it. They’re added to so many sauces, salads, and rubs for meats because they have this incredible meaty umami flavor. (Umami is a hard-to-describe savory flavor that basically enhances the flavor of foods.)

ALSO! We’re not really measuring any of this. I’ll give you suggestions as to how much but don’t worry about it. You don’t need to be as anal-retentive about measuring in cooking as you think you do. You’ll learn. You’ll get it.

Take a half a box of linguine (or spaghetti, or bucatini) and get that going in some salted boiling water. Then, heat some olive oil (like three quick seconds of glugs) in a sauté pan and gently fry some garlic, chili flakes, and crushed walnuts, but DON’T LET THE GARLIC BURN! After a few minutes add some roughly chopped anchovies (like 6-8 but again we’re not measuring!) into the pan (you can find anchovies next to the tuna in your grocery store!) Use a wooden spoon to kind of press them down into the pan. They’ll start to get all melty. You’ll start to get all drooly.

Take some pasta water from your pot (like almost a full coffee mugs worth) and add it into your pan. When the pasta is just about done, drain the noodles and add them to your anchovy mixture. The cooking liquid you put in there is going to help form a sauce. Add in some chopped parsley, chopped dill, a fresh squeeze of lemon, and some freshly grated Parmesan. WAH-LAH! (Is that how you spell that?) Take this as a lesson: herbs are a shortcut to looking like you know what the f*ck you’re doing. Herbs serve a purpose. They give flavor and freshness and color that definitely only A Real Cook Who Definitely Knows What They’re Doing would care about. I put them on everything.

This is “I Know What I’m Doing In The Kitchen: Party Appetizer Addition.” Greek yogurt is my favorite canvas!! It can be painted a myriad of ways and all the best ones are savory (sorry healthy breakfast Instagrammers!).

Alright, so we’ve got our hefty amount of greek yogurt (if you’re going to a party you’re probably using a tub’s worth – PEOPLE LIKE DIPS), which you’re going to hit with a hefty amount of herbs (I like dill, parsley, and mint for this). Add in some grated garlic (get yourself a microplane, babe!), some freshly ground pepper, a squeeze of lemon juice, a hefty glug of olive oil, and flaky sea salt. Mix it all up, then hit it with more olive oil for aesthetic reasons. Top with more herbs. I will prove the science behind hot soup making bad days better before I die if it’s the last thing I do.

Also if you’ve just started dating someone and want to be very casually like “Oh yeah I can cook no big deal” invite them over for this soup on a Sunday night. Sorry if you’re not ready to get proposed to.

Start by heating some olive oil over medium heat in a big soup pot. Then add some chopped onion, celery, and carrots (you want to chop up the big ones that you can typically buy separately, not the little baby carrots) with some salt and pepper. When your veggies have softened up a bit (eh, like 8 minutes) add in some chopped garlic, farro (a delicious nutty grain, you can find it by quinoa usually!), canned white beans, a can of chopped tomatoes (with the juice!) and a carton of chicken stock.

Bring it to a boil and then turn it down to a simmer (that means just below boiling) and let it sit uncovered for about 30 minutes. Stir in a handful of chopped basil. Taste it! Adjust whatever you think it’s missing (trust yourself!). Serve it with a mountain of Parmesan cheese. MUSSELS SOUND SO MUCH MORE INTIMIDATING THAN THEY ARE. DO NOT FEAR THE MUSSEL.

Preheat your oven to 375. Put bacon strips on a cooling rack over a cookie sheet. Cook the bacon until it’s crisp and then let it cool. While it’s cooking scrub your mussels (let’s say like two dozen-ish). Now crumble up the bacon (reserve the bacon juice – I’m sorry I don’t know what else to call it.) Turn the oven up to 500. Place the mussels on a sheet pan and bake them until the shells open (like 6 minutes). Discard the ones that don’t open.

Put like ½ cup of dried breadcrumbs with chopped parsley, thyme, minced garlic, the crumbled bacon, salt and pepper into a bowl and combine it. Add some of the bacon fat (I found a new term) until there’s enough in there to hold the stuffing together. Spoon it evenly over your opened mussels, then pop them back in the oven for another five or so minutes to get that breadcrumb mix niiiiice and toasty. 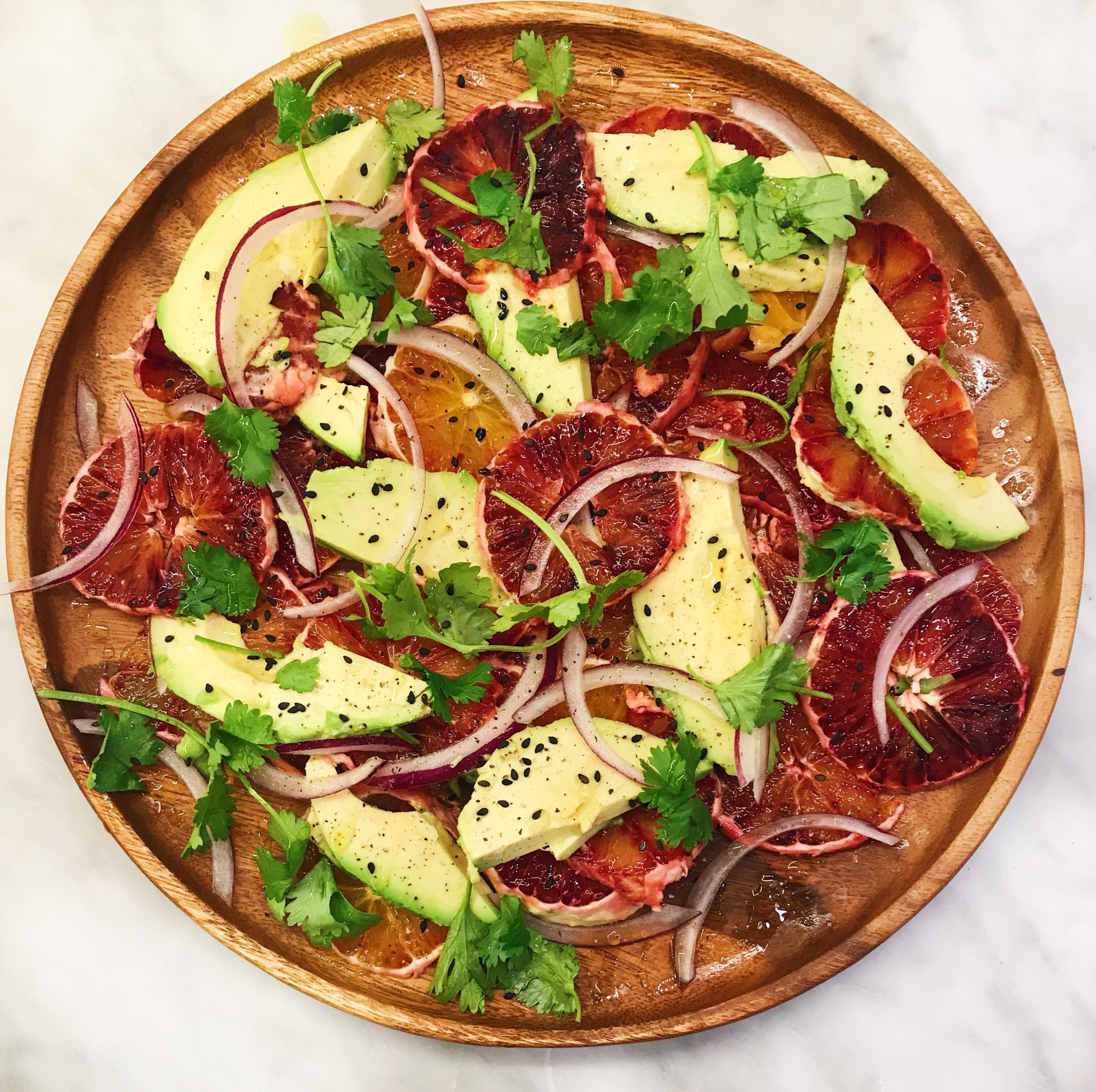 This is basically just laying really pretty colorful things on a plate. You’re tricking people into thinking this is exotic and takes effort because there will be colorful produce laying in a somewhat symmetrical pattern.

This recipe is from Alison Roman who has a wonderful cookbook called Dining In, which you should purchase immediately.

Take ¼ of a small red onion and slice it very thin. Soak the onion slices in a bowl of ice water for ten minutes – it’ll take away the oniony bite but make it super crunchy. While you’re doing that, arrange and layer four peeled and sliced blood oranges with one thinly sliced avocado. Overlap them, make it look purrty. Drain your onion slices and scatter those on top. Drizzle with the juice of half a lime, then top it with flaky sea salt and freshly cracked black pepper. Sprinkle with black sesame seeds and cilantro (stems included). Drizzle the whole thing with olive oil.

What are your go-to, easy-as-pie recipes that look like they require you to be a wizard in the kitchen? TELL ME, I have more people to impress.

Love the first pasta dish. This is a funny idea and definitely something I would try 😉
– https://www.bloglovin.com/blogs/maja-harder-18257183

Feeling super hungry after seeing all these photos. The citrus salad sounds like everything I love together. There’s never a bad time for salad, even in winter! 😉
–
Charmaine Ng | Architecture & Lifestyle Blog
http://charmainenyw.com

The bad day soup looks so good. Seems fairly simple to make. I should for sure give that one a try.

I enjoy reading your articles, Liz. You are a gifted writer with wit, style and sass! (Much like your mama)

Reply
Liz
Reply to  Lisa B

Like everyone else, I’m all about that soup! I plan on making it on the coldest night this week (i.e. tomorrow). Thank you for sharing!

Oh my god that sounds so nice that I think I might copy you.

At the risk of sounding like a crazed fangirl, Liz, you’re a favorite writer of mine. Mostly because Im afraid (in a great way) that we have similar sarcastic, funny, occasionally self deprecating inner monologues, and nearly everything you say speaks to my soul. So, thanks for that. You know how to keep a girls spirits up! And the answer is yes. Everyone loves dips, if you don’t you’re doing it wrong.

Kelly you should know that I’ve screenshotted your comment to look back on when I’m having bad days!!! I might make it into a poster and put it above my bed idk yet!!!! THANK YOU FOR THAT.

My latest favourite W&D activity is seeing if I can guess the writer and how long it will take me to get there.

I always figure out it’s a Liz Welle piece before finishing the introductory paragraph. Liz, you’re a special one. And I always look forward to your pieces here. Which obviously says you know a little about what you’re doing. 😉

SARAH THAT IS SO DANG NICE!!!! I am printing this off for my fridge and also my mom’s fridge.

I want to make all of it! Yay thank you for the inspiration!
Any cookbook tips or blogs are also very welcome 🙂

I read this yesterday and made the Bad Day soup last night. I had never even made soup before. It was so easy and so delicious (and I added some chicken sausage too!) THANK YOU!

OKAY I AM ABSOLUTELY STEALING THAT IDEA!

Take it from a southern girl who know about bacon grease, we refer to it as bacon DRIPPINGS. There is always a jar in my freezer! Its Texas gold!

I trust Southern Girls on anything cooking ever.

Liz, I always knew you liked the colorful pictures in cookbooks! Now you have taken it one step farther and added your own colorful personality to a long time love affair you have had since you were a wee little one. I will never forget our cooking session we had when you were about 5 or 6. Grandma has put that memory in a SPECIAL MEMORY BOX , only to be opened when I need my LIZZY FIX. Only difference is, I think we were making the yummy, sweet, bad for you treats and now you are a very outstanding… Read more »

For those of us who aren’t big anchovy fans, any recommendations for a good substitution in the pasta dish?

This post is already making me hungry and I ate a couple of hours ago. The pasta looks delicious!

That salad looks like something I’ll probably be making soon!

Thanks to this article I can learn more things. Expand your knowledge and abilities.

Hi! For the soup, if I replace the farro with quinoa, for a gluten-free option, would it be the same method, and cook the same way?